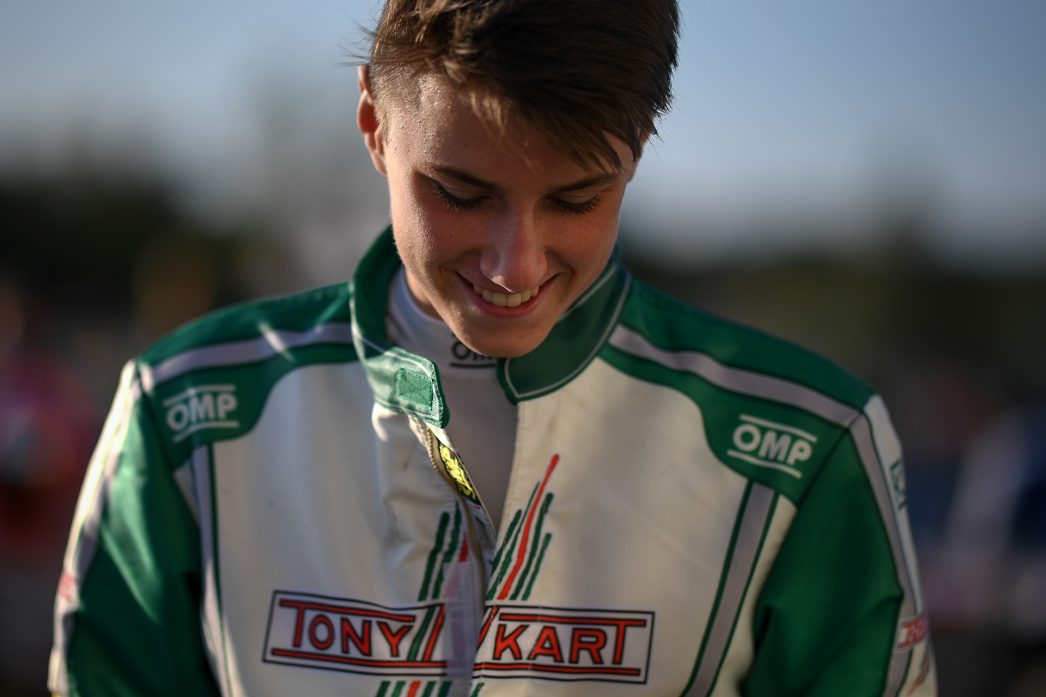 Colin Jamie Bönighausen was able to represent the German colours at the CIK-FIA Kart World Championship in Alahärmä, Finland from Septmeber 5th to 8th. At the season highlight of the best kart drivers in the world, the young German pilot faced some challenges, but knew how to master them confidently. Initially, team Bönighausen decided to return to the well-known Tony Kart chassis with Vortex engine. After a year in the KR-Boliden, this was a significant change for Bönighausen despite the return to the tried and tested package, which of course meant a certain training period. In addition, he also had to have the for him previously unknown LeCont tires, which the CIK had prescribed for the World Championship. And, as if that wasn’t enough, the World Cup run was only the Hanoverian driver’s second appearance at the Finnish Power Park on the Mika Salo Circuit. Nevertheless, Bönighausen was motivated and confident in taking on his task and was looking forward to being one of a total of 87 riders who had the opportunity to become the best kart driver in the world.

After the free training sessions on Thursday and Friday morning, the qualifying practice, followed in the afternoon. Divided into four groups, the pilots went on the track, where Bönighausen came in 20th place in the fourth series, which meant a total of P79. Above all, the unfamiliar tires and the with that associated setting of the kart had the 14-year-old, at this highest level, struggle. But he quickly learned and presented himself in his usual form at the warm-ups on Saturday morning and finished in a strong fourth place in his group.

The starting situation in the following heats was now imaginable difficult, as he had to start from the back rows into these races, which of course was hard work. In the first of his five races he adjusted quickly and was able to orient himself forward before a technical defect set him back. He dropped out in eighth lap. Difficult external conditions with alternating weather conditions in the two final heats of the day made life even more difficult for him. But he accepted the challenge confidently, fought his way up the highly decorated field and improved lap by lap. The goal was not only a great performance, but also an improvement of a total of nine positions. The joy of the strong performance could not tarnish a time penalty because of a triggered front spoiler. The third run was almost identical, again it improved significantly, this time by eight places. The well-deserved reward was 57th place after the first day of the race, an undoubtedly great achievement, considering that the placement would have been even better without a technical failure.

Accordingly motivated Bönighausen went into the final day, knowing that reaching the final’s grid would be incredibly difficult. After finishing 26th in the fourth round, an engine failure in the last heat destroyed any dreams of participating in the final at the CIK-FIA World Championship.

Colin Bönighausen was satisfied: “Of course it is a pity that we had to suffer two engine damages in the decisive races of the World Championship, but that’s motorsport. Overall, it was an incredible experience to be able to participate in the World Cup and to have these experiences. Many thanks to my parents, who made this possible for me, and to my school, who also supported me greatly.”

Father Klaus Bönighausen: “Those were many new things at once for Colin: the kart change, a new engine, the track here in Finland in changing conditions and all this against the best kart drivers in the world. Since Colin did not participate in the European Championships this year, he did not know the LeCont tires that the CIK prescribes. But we have a long-term career plan and such international highlights are an important part of that. And that’s why we’re very proud of our son for how he has mastered this challenge.”

Now, the final races of his main series are waiting for Colin Jamie Bönighausen, after the Rok Cup Germany final come the ADAC Kart Masters and the International German Championship. Above all, he has firmly planned the first major title at the national Rok Cup from September 21st to 22nd.