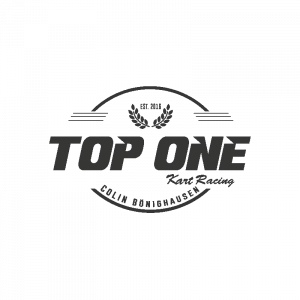 The TOP ONE Kart Racing team around Colin Jamie Bönighausen is managed by his father, Klaus Bönighausen.

The team has set the goal to bring Colin as far forward as possible in motorsport. Until his move to KSM, Colin and Klaus started with the team all over Germany and competed for championships of the NKK, the ROTAX Max Challenge and the ACV Kart Nationals.

In 2017, several PR appointments were held, including a training session with Florian Silbereisen at the Schlagerfestival in Oldenburg, who drove live in the ARD with the T.O.K- Kart on stage. But there was also a show run at the mountain race in Julbach (AT) in front of about 25,000 spectators.

Klaus Bönighausen is a father, mechanic and driver in one person.  As Colin's father, the 2016 European Hovercraft Champion takes on a very important position in the team. For the young pilot, he is an important support and provides support in the decisive moments.

The recipe for the success of the TOPONE kart racing team with Colin lies in the constant urge for improvement. That's why it's very important for the team to test a lot. Almost every weekend, the family from Isernhagen spends time on the karting tracks in Germany, where even big motorsport names such as Rosberg, Vettel or Schumacher were on the road.

The team took the next step at the end of 2018, when they was able to hire the experienced motorsport driver and mechanic Niklas Frantz. The friendly but always performance-oriented interaction between Colin and Niklas is not only reflected in the increasing race intelligence but also in the racing successes.